The School of Russian and Asian Studies is an international team. Each of us has personally studied within the Russian educational system and traveled within Eurasia, giving us first-hand knowledge of this specific geographic area. We’ve built relationships and a network of contacts that help our students not only with academic programs, but also to travel, seek jobs, pursue hobbies, and more – and not only while abroad, but long after the program ends. We at SRAS are here to help you realize the goals you set for yourself.

Want to Meet Us in Person?

Excellent! We’d love to! Check this page for our conference attendance and/or how to invite us to your campus for study abroad fairs or classroom visits. 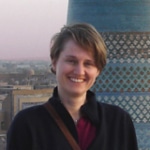 Renee first visited the Soviet Union in 1990 to study at MGU after graduating from Boston University with a BS in Biomedical Engineering. After working at a technical translation company in Boston, she returned to Moscow in 1992 for permanent residence until 1998. During that time she worked in the Russian financial markets and eventually founded SRAS as well as co-founded Alinga Consulting Group (now merged to Bellerage Alinga). Renee is now based in Woodside, CA with her family and continues to travel frequently not only to SRAS sites, but throughout the world and with eyes open for new ideas in education abroad.

Josh has lived in Moscow since 2003, when he first arrived to study Russian with SRAS. He holds an M.A. in Theatre and a B.A. in History from Idaho State University, where his masters thesis was written on the political economy of Soviet-era censorship organs affecting the stage. At SRAS, Josh assists in program development and leads our Home and Abroad Programs. He is also the editor-in-chief for the SRAS newsletter, the SRAS Family of Sites, and Vestnik. He has previously served as Communications Director to Bellerage Alinga and has served as a consultant or translator to several businesses and organizations with interests in Russia.

Lisa, to the perplexity of her German-rooted North Dakotan family, graduated from Reed College with a BA in Russian Literature. After attending SRAS’s Translation Abroad Program (now part of our Home and Abroad Programs), she worked in Moscow for two years as an in-house translator and as the SRAS Moscow Student Coordinator. Lisa was then promoted within SRAS and now leads our admissions & enrollment processes, and is our Russian visa lead. She studied previously at Smolny Institute in St. Petersburg and at Moscow State University. When she is not working, you might find her running in the woods of Minnesota, playing with her three children, or on a canoe in the Boundary Waters. 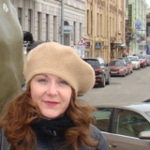 April first traveled to Russia in 1996 when she was a student at Georgetown University. A few months turned into a few years and several cities in Russia before she returned to the US and and completed her B.S. and M.S. in Communications at Northwestern University. April has worked with several international organizations in both the U.S. and abroad including the International Research and Exchanges Board (IREX), the U.S. Consulate, American Library Association and Upwardly Global. She also has experience in higher education administration. In 2013, April returned to St. Petersburg, Russia where she resides with her family. She enjoys the daily discoveries that come with living abroad and strives to facilitate authentic cultural experiences for  visitors. At SRAS, April oversees the development and delivery of student services and operations across our locations. She also contributes to program innovations and development of faculty-led programming. 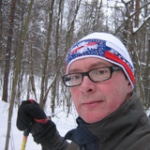 Sergei was born and raised in Siberia. He graduated from the Department of Philology at St. Petersburg (then Leningrad) State University with degrees in English Language and English and American Literature. He worked for a few years as a teacher of English in a secondary school before becoming a licensed tour guide, which has been his primary profession for the last two decades. Sergei loves living in St. Petersburg’s “suburbs” – combining an active country life with all the opportunities that a big, cultural city offers. He is a great fan of the Russian banya and enjoys cross-country skiing.

Andrei Nesterov has reported on political and social issues for the Russian press as well as American outlets such as Russian Life, Worldpress.org, and Triangle Free Press. He has travelled Russia extensively and penned many stories on the “real Russia” which lies beyond the capital and major cities. Andrei graduated from Ural State University (journalism) and Irkutsk State Linguistic University (English). He studied public policy and journalism at Duke University on a Muskie Fellowship and went on to study TESOL and teach Russian at West Virginia University. He is currently working on an PhD from West Virginia University in Political Science. Andrei contributes news, feature stories, and language resources to the SRAS site, and is an overall linguistics and research resource.

Elena holds a Ph.D. in art history from the Institute of Fine Art at the State Academy of Art in Moscow. Having worked for the State Hermitage Museum in St. Petersburg as a researcher and lecturer for over two decades, Elena moved to the US where she now teaches art history at the Rhode Island School of Design (RISD) and Eastern Connecticut State University. Her course offerings embrace European, Russian and Asian art with an emphasis on early 20th century Russian art and Japanese ukiyo-e woodblock prints. A published author and an exhibition curator, at SRAS Elena leads the Workshop for Museum Professionals hosted by the Hermitage each summer. She also advises on all SRAS art programs. 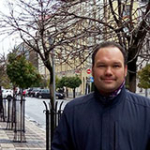 Mikhail Rybalko graduated from Texas Tech University in 2014 with a PhD in Political Science. He also holds a Russian Candidate’s Degree in History from Irkutsk State University. Mikhail has also studied in New Zealand, Hungary, and Lithuania. He is currently an instructor in History and International Relations at Irkutsk State University. He actively participates in the life of Irkutsk as a member of a number of ethnic and civil organizations. Mikhail is widely traveled and is very enthusiastic about introducing Russian cultural life to SRAS students. Mikhail coordinates SRAS student arrivals, travels, and activities in Irkutsk. 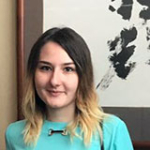 Yulia holds degrees in International Relations and Tourism from Vladivostok State University of Economics and Service. She speaks English and is learning Korean. She now works in the International and Cultural Affairs Department of International Academic Mobility Office and coordinates SRAS student services in Vladivostok. Her key responsibilities are students’ orientation and adaptation, excursion programs, and cultural activities. She loves to work with foreign students and visiting scholars and delegates, contributing to the development of VSUES international relations.

Kendje holds an MA in Linguistics from Kyrgyz Humanitarian University and a BA in Teaching English from Kyrgyz English College. She is also a certified teacher of Russian as a Foreign Language. She has traveled extensively, including to the United States, and enjoys meeting people participating in cross-cultural projects. Kendje co-founded and has served as the director of the London School of Bishkek since 1998 and has been involved in education in the former Soviet Union since 1986. She now serves as an advisor to SRAS on Central Asia and oversees and manages our Central Asian programs. 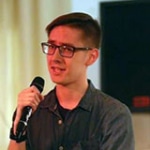 Alex holds a BA in Teaching Russian as a Foreign Language (RFL) and an MA in Translation. He is currently pursuing a Ph.D. in philology. He came to Moscow from Tolyatti to study at Lomonosov Moscow State University in 2013 and has been in love with the city ever since. Alex coordinates student activities in Moscow for SRAS. When he’s not occupied with that, Alex likes to play guitar, sing, read, play videogames, and make YouTube videos. 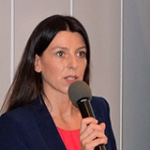 Dr. Maniszewska is an expert in security issues as well as a journalist and philologist. Her research focuses on the history and development of political extremism and terrorism with particular emphasis on media coverage of terrorism. She is a member of the Scientific Board of the Terrorism Research Centre and lecturer at Collegium Civitas University, Warsaw, Poland. Her academic publications include two books on the history of terrorism as well as numerous papers devoted to subject such as the role of the media (incl. the Internet and social media) in the strategies of terrorist organizations. In her papers she points out the significance of media-literacy and public education in enhancing the traditional counterterrorism measures. Dr. Maniszewska is the Vice-Rector for International Relations at Collegium Civitas. 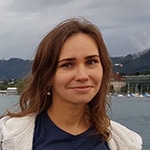 Evgenia holds a degree in Russian and English Philology from Northern Arctic Federal University in Arkhangelsk. She has lived in St Petersburg for the past seven years. Evgenia coordinates student adaptaion and activities in St Petersburg for SRAS and works as an exchange student coordinator at St Petersburg State University of Economics. She speaks English and strives to improve her German with varying success. Evgenia enjoys writing short, creative articles about cultural life and traditions in Russia. Aside from work, she enjoys playing the piano, listening to music, and being out in nature. 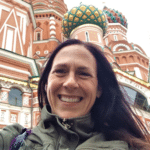 Molly first went to Russia in 1991, landing in Moscow as Yeltsin was speaking on a tank outside the parliament. Molly graduated from The University of Texas at Austin with a degree in Slavic and Eurasian Studies. She worked for MIR Corporation in 1994 and 1997, having great adventures riding the Trans-Siberian and searching Tuva for throat singers and camel herders. Molly began her journey in the world of study abroad in 2002 and has worked with universities across Europe, Asia, Australia, and New Zealand. She joined SRAS in January of 2019 and will work to develop new university partnerships, while expanding and strengthening our existing university relationships to better serve more students. Molly is based in Austin, Texas where she lives with her family. 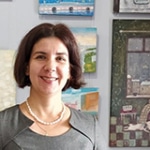 A native of St. Petersburg, Elena Nesterova holds a BAs in English Pedagogy and Humanities from St. Petersburg State Pedagogical University. Elena comes to SRAS after many enjoyable years working in the administrative section of the U.S. Consulate General in St. Petersburg. As SRAS’ Administrative Specialist, Elena is responsible for providing overall support to our organization and its various programs and services. In her free time, Elena likes travelling and exploring new places, meeting with friends, and playing sports.

Just yesterday my student successfully defended her honors thesis on environmentalism around Lake Baikal, a project that would not have been possible without the fieldwork that she conducted on her SRAS study abroad program in Irkutsk. I hope to see more such projects in the future and will keep directing students to SRAS programs!

At Stetson, we’ve used SRAS to arrange all of our student study abroad trips for the past five or six years. During that time we’ve sent dozens of students on summer- and semester-long programs in Moscow, St Petersburg, Nizhny Novgorod and Irkutsk. In every interaction I’ve had with them, SRAS has been prompt, reliable, knowledgable, courteous and quick to lend a hand when needed.